If you need help, Click Here for all of our Installation Resources﻿

Based on popular demand, our new "RPK-Hardware" is now available for purchase as a separate product.

We are continuing to offer a FREE AR-15 Safety Pin with EVERY WEB BASED ORDER!

Whatever your purchase, you'll receive an additional AR-15 Safety Pin. 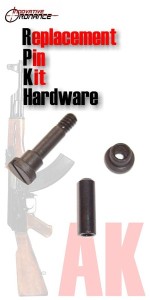 The RPK-Hardware© is a precision made replacement hinge screw sytem for all AK-firearms.  This screw set replaces the original factory installed 5mm hinge pin used on all AK mag latch housings.  Instead of having to hammer and peen-in this hinge pin, you can use this precision screw and nut to easily complete the job for any AK magazine latch installation.

The RPK-Hardware© is the same hardware supplied with our TAK-Latch© and KGB-Latch©, and its unique design accommodates all the variances from one latch housing to the next. A machined guide pin is also provided to aid in assembly on the rifle, holding the latch and spring as one unit. 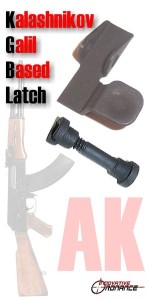 Innovative Ordnance introduces the all new KGB-Latch©  design (Kalashnikov "Galil-Based" Latch), drawing upon inspiration from our very successful TAK-Latch© and the original right hand index-finger operable magazine latch introduced on the IMI Galil.  Just like our TAK-Latch©, the KGB-Latch© provides users with a tactical advantage for magazine changes, allowing you to maintain correct tactical control of the rifle with your grip hand and swap magazines in one easy motion.

Unlike other latch extension products that clamp, screw, or rivet onto your existing latch, or other bulky/clunky replacement latch designs, the KGB-Latch© is the first "True" AK Mag latch that looks like your original factory latch. Its complementary design and construction are both aesthetically and functionally superior to any other AK latch product available.

The Missoula Montana Police Department has now acquired several AR-15 Safety Pins for use in their standard issue AR-15 rifles as part of their ongoing weapons training and certifications program.  "We will use them during initial training with the rifles for manipulation, checking, loading, and clearing type drills, and in ongoing training for those same tasks.  We currently qualify with them every 6 months or so".

The Innovative Ordnance AR-15 Safety Pin allows the department to train with an inert, but functional AR-15 rifle providing the most realistic training environment while maintaining 100% "no-fire" operation in the unlikely event of an unintentional discharge during these exercises. ﻿

Innovative Ordnance, Inc., announces the grand opening of our new web site and web store.  Activating the site and officially launching the business are momentous achievements for everyone involved.  Celebrating this occasion in an industry we're personally passionate about makes this event so much sweeter as the realization of becoming a recognized brand becomes one step closer.  This opening represents a milestone for the company which has undergone an intense past few months--finalizing all that is required to get the operation up and running such as product procurement, packaging, photographs, site content, documentation, videos, you name it.  A huge final push was performed by everyone to get us over the hump and online.